In early 2016 I worked on what I think was a really interesting project, where I mapped and walked a 200km route around a meteorite crater in Northern Scotland carrying a Google Trekker weighing a little over a third of my body weight. The route developed through this project is called the ‘ Central Sutherland Crater Walk ’ and it follows a line around the circumference of the UK’s only known terrestrial meteorite impact crater. This crater was left by an impact, thought to be one of the largest ever to have struck Earth. Although the impact has been estimated to have occured 1.2 billion years ago, the crater was only recently discovered in 2015 following about a decade of observations and research. For me the route is a really great way to experience some of the remoter parts of the Northern Highlands and also gives the chance to explore some of the natural and cultural heritage of the area. Below I share the initial inspiration for the route which came from a chance glance at an article about the crater, a little of the science/geology of that discovery, then I describe the route and talk about its development so far. 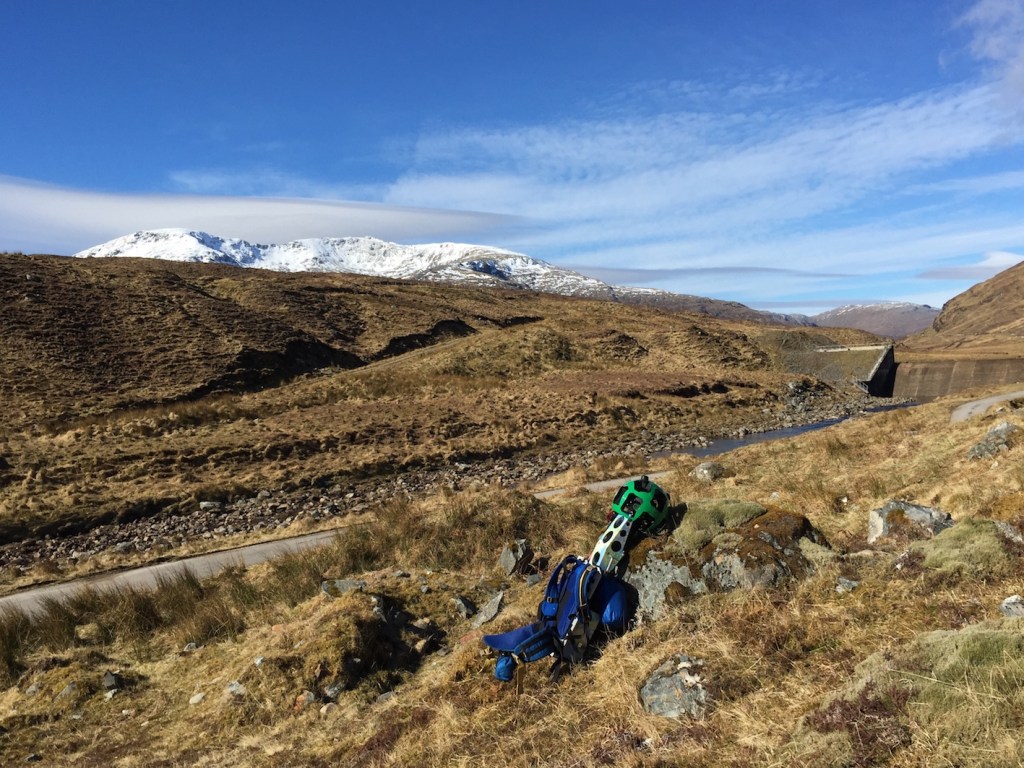 The Google Trekker on the Central Sutherland Crater Walk in upper Glen Cassley. Ben More Assynt in the background.

BACKGROUND TO THE CRATER AND HOW IT WAS DISCOVERED

The idea that there might have been an impact affecting Northern Scotland started with the discovery of shocked quartz grains in a group of rocks known as the Stac Fada Member at Stoer on the Northwest coast back in 2006. These shocked grains indicated that these rocks were formed as a result of a major impact somewhere nearby. Initially it was believed that this impact must have taken place somewhere to the west under what is now the Atlantic. However, a few years later, Mike Simms, a natural scientist and curator of paleontology at the Ulster Museum visited the area on holiday. During his visit he made a number of observations which both corroborated the idea that the rocks of the Stac Fada Member had been caused by an impact and indicated that the impact actually happened somewhere out to the east over land.

Simms decided to take a look at gravity maps of northern Scotland produced by the British Geological Survey and in doing so he noticed that around the village of Lairg there is a gravity anomaly. The Northern Highlands are underlain by a consistent sheet of ancient metamorphic rocks called Lewisian gneiss, which has a high density and therefore a high gravitational pull. The gravity anomaly Simms was looking at suggested that essentially a hole has been punched into that layer of gneiss.

So, using the orientation of features in the Stac Fada rocks and then the gravity maps as his primary evidence, Simms traced the impact back to its source and proved that the crater impact had centered on Lairg and was still evident below the surface!

WHY DID I DEVELOP THE ROUTE?

Having read about the discovery of the crater online on the BBC news, I remember thinking at the time that it was a pretty cool discovery and straight away had the thought that it would be a fun thing to walk around! With a background in science and engineering, the concept of a meteorite impact crater so close to where I lived also interested me so I did a bit more research on the crater and read the paper which Mike Simms had written detailing the discovery of the crater. In this paper there was a map, which showed the gravity anomaly around Lairg superimposed onto a map of Northern Scotland.  Using this map I made an approximation of where the edge of the crater would be and started to try and link together a route on OS maps.

In 2016 I had worked with a Sutherland based arts and heritage organization called Timespan. I had been involved in organizing and leading a walk with them through the local peatland landscapes in response to their gallery exhibition at the time. With this existing relationship I felt that the crater discovery and my planned route resonated with some of their programme themes and so I submitted a proposal to them to work collaboratively to develop the route. They accepted my proposal and so I started to examine the project in more detail. 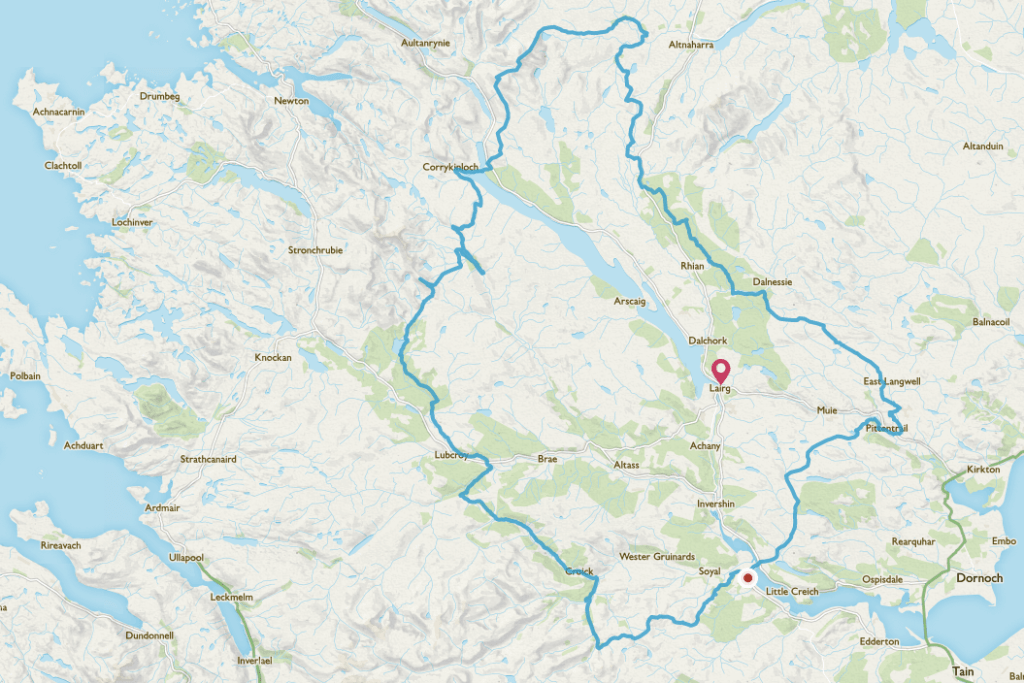 The Route of the Central Sutherland Crater Walk

As I mentioned at the beginning, the route itself is roughly 200km in length, which, for planning purposes, I split into 10 distinct stages and is a circuit around the wild and sparsely populated landscape of central Sutherland. Although it is a circuit, it doesn’t make a circular shape, rather it is more like an egg! This maybe gives some indication of the trajectory of the meteorite as it impacted with the Earth.

The walk goes from the Dornoch Firth on the east coast, and follows a network of ancient routes through the glens and straths in a generally westerly direction until it reaches the eastern edge of Assynt. From Assynt the route turns northwards and crosses a series of high mountain-passes to reach the edge of the flow country of north-east Sutherland and Caithness before it heads back south, passing between Scotland’s two most northerly Munros to reach the Dornoch Firth once more.

The route lies almost entirely in Sutherland, the largest county in Scotland and the landscape the route passes through is very diverse. The route crosses several national scenic areas and wild land areas as designated by Scottish Natural Heritage (SNH). Along the way it passes through the most northerly remnants of the ancient Caledonian pinewoods and near to the Alladale Estate. Alladale terms itself a “wilderness reserve” and has developed proposals to reintroduce various native animal species, including wolves. Nothing has come of these plans at present but the estate has been involved in some ‘rewilding’ efforts, including planting 800000 native trees.

At Alladale the route passes Croick Church, a Thomas Telford designed church with links to the Highland Clearances. There are engravings in the eastern windows of the church that are thought to have been made by people sheltering behind the church as they were being cleared from the surrounding glens in the mid-1800s.

The route also goes through the Flow country, Europe’s largest expanse of blanket bog, an important carbon store that holds more than twice the amount of carbon stored in all of Britain’s woodland!

The final eastern stretch is a varied landscape of forestry, hill farming, renewable energy developments and open moorland.  It is an area where debates about land-use and how the Highlands should look in the future are inescapable.

WHAT’S BEEN DONE SO FAR – THE GOOGLE TREKKER 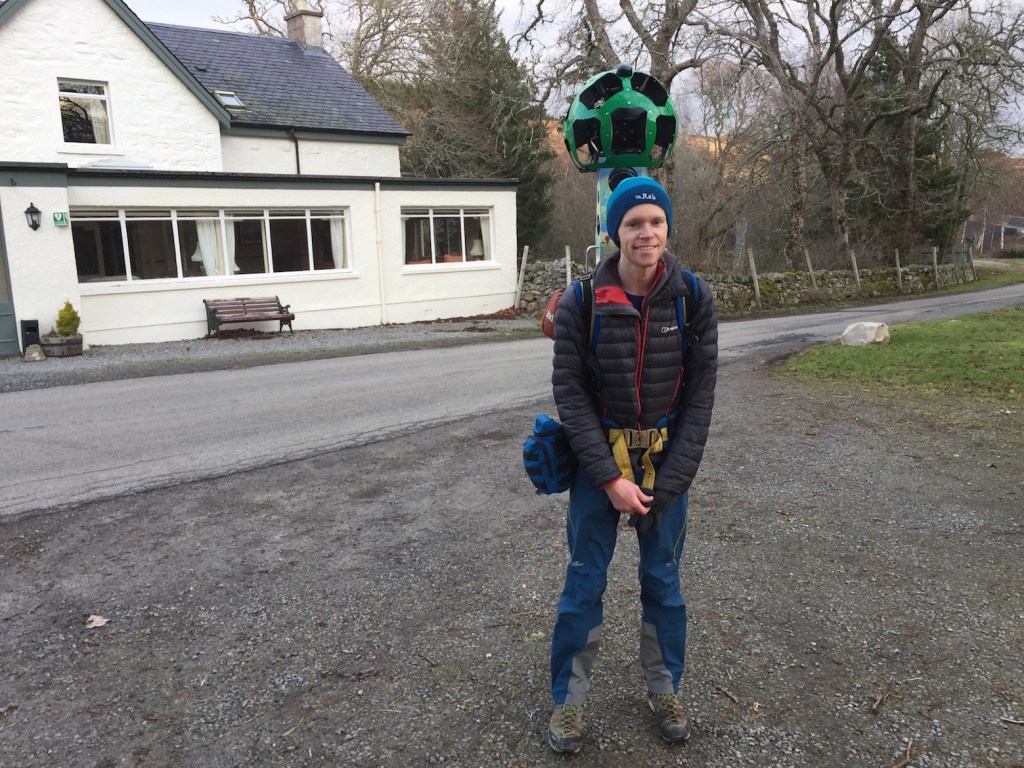 Me looking tired with the Google Trekker at Oykel Bridge after a long day’s trekking!

After mapping the route, the next thing was to walk it. With Timespan, I applied to Google and secured a loan of a Google Trekker to take with me on the way. This is essentially the camera set-up from a Google Streetview car in backpack form. It had a processing unit containing the memory cards and batteries, which are mounted onto a metal frame with fabric back support, shoulder straps and a hip belt. On top of the processing unit is a pylon and mounted on top of this pylon is a large spherical unit containing all the cameras. There are 15 cameras in total, taking 360-degree views every 2.5 seconds and the whole set-up weighs 22kg! By taking the Trekker I was able to capture imagery of the whole route, allowing people to explore the walk from anywhere in the world.

I received the Google Trekker towards the end of January 2017 and it was quite an exciting thing with boxes to be opened and bits of kit to be assembled. However, walking with the Trekker was a bit of a logistical challenge. Firstly, It couldn’t go out in the rain. As you can imagine in the north of Scotland in winter this was an interesting thing to contend with! Short daylight also imposed limitations of how long I could walk recording imagery and I had no indication of what impact the cold conditions would have on the battery life of the Trekker.

Although walking with the Trekker was a challenge, both logistically and physically, carrying such a heavy load (and on a couple of occasions I had to be quite agile with it on my back!), I really enjoyed being out in the hills with it. It provided me the opportunity to get out and explore hidden corners I hadn’t visited before and gradually see winter transition into spring as I went! Over the course of February and March I managed to piece together enough days where all the things came together, helped in no small part by the most benign winter that we’ve seen in Scotland for decades. So at the end of it all I managed to complete the task and imagery now exists for the whole route. This went live on Google Streetview in November – you can find it by clicking HERE or by searching for ‘ Central Sutherland Crater Walk ’ in Google Maps.

Following on from the Trekker walk, I ran two public walks on the route for Timespan, along different sections of the route that I selected to cater for different ability levels (you can read about the first of these here).  These walks attracted a varied audience with local and not-so-local people and included people interested in geology, archeology, history and photography. I ran another independently in 2018 and I hope to organise more in the future. Currently I am also working on a guidebook for the route and plan to walk the route in a single backpacking adventure during early 2019. More on this later.

Despite the North Coast 500 driving route taking off in recent years, encouraging visitors to explore around Scotland’s northern coasts, the interior part of the country up in Sutherland is still little explored. Awareness of the area has been slightly boosted by the announcement from the Ordnance Survey in Autumn 2018 that their OS Explorer Map 44o, Glen Cassley & Glen Oykel was their least sold map. I think there still a lot of potential to bring this really amazing part of Scotland more into people’s consciousness and, in terms of rough and wild long-distance walking routes in the UK, I reckon this one is up there with the best of them!