New Year in the North-West 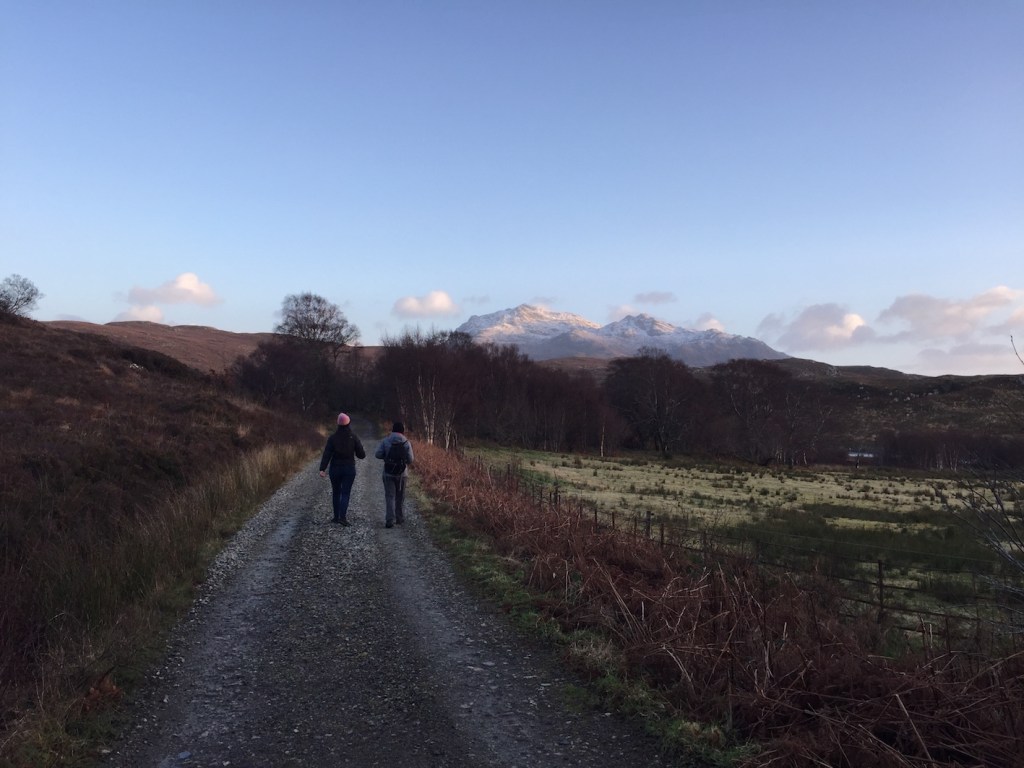 Last week I returned north to Scotland on the Sleeper with my partner and her mum. It was refreshing to be back in the Highlands after the hustle and bustle of central London! After shopping in Inverness we were headed for the west and after a brief lunch stop in Beauly, we made all haste for Gairloch.

It was great to be back in the north-western Highlands, but for our first few days we were storm-bound with sheets of rain, severe south west winds and unseasonably mild temperatures. The hills were almost completely cleared of snow. I did get out for some walks and runs but mountain-based activities, particularly of a wintery variety, were a no go. It was a shame to end 2016 this way after a year of many adventures!

Then, late on Hogmany, a cold front swept down from the north and early 2017 has so far seen a completely different kind of weather and a welcome drop in temperature. There was even a brief clearing that allowed us to bring in the bells on Big Sand beach, whisky in hand, under a sky full of stars with the milky way a clear bright streak across the sky.

New years day there was some nice sunshine amongst scattered hail showers. I went for a run over to North Erradale from Big Sand, which was really wet underfoot in places, then in the afternoon we drove over to Poolewe and took a walk in toward Kernsary. This was a lovely, calm walk by the River Ewe with great views of the snowy Fisherfield, Letterewe and Torridon Hills. We stopped by a river for coffee and shortbread then walked back just before it got dark. Very civilised!

I got up my first hill of 2017 in on the 2nd. I chose Beinn a’ Chearchaill as it was one of the few hills in the range between Flowerdale and Glen Torridon that I still hadn’t done. It is famed for its summit views of the Torridon hills, in particular the spectacular Coire Mhic Fhearchair on Beinn Eighe. There was none of that today though as I entered the cloud at around 500m. It was very wintery with fresh snow from about 300m and the wind chill on the top was significant. The conditions made for good navigation practice and, regardless of the lack of view, the summit area of this hill is really quite a surreal landscape. This would be a good hill to go back and do again on a clear day.

In the end it turned out to be a shorter walk than I expected so I also got a sunny walk along Gairloch beach on my way home. Then in the evening I managed another wee walk on Big Sand beach. I had this mile long expanse of sandy beach all to myself as I watched the final light of the day fade behind Longa Island. It is such a privelage to have places like this on the doorstep. 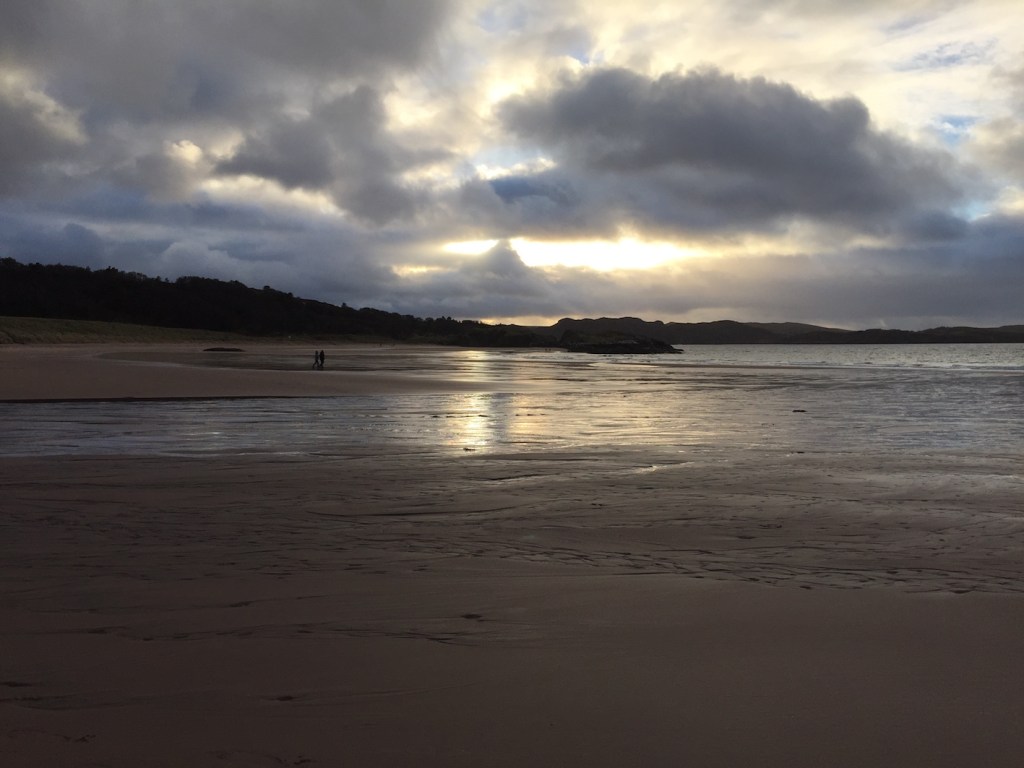 A lovely afternoon for a walk on Gairloch Beach

On the 3rd we were storm bound once more and after a morning 5k, it was time to turn my attentions back to work.

Then, yesterday it was time to head back to the east coast. But not before a wee trip to Torridon! The weather was much improved with light winds, cold temperatures and the cloud above summit level. Not much snow around yet, but the views of the hills were great, particularly Liathach and Beinn Eighe. Both of these long ridges make excellent mountain days and Liathach offers one of the best ridge scrambles in the north west. Looking forward to getting back up there soon. 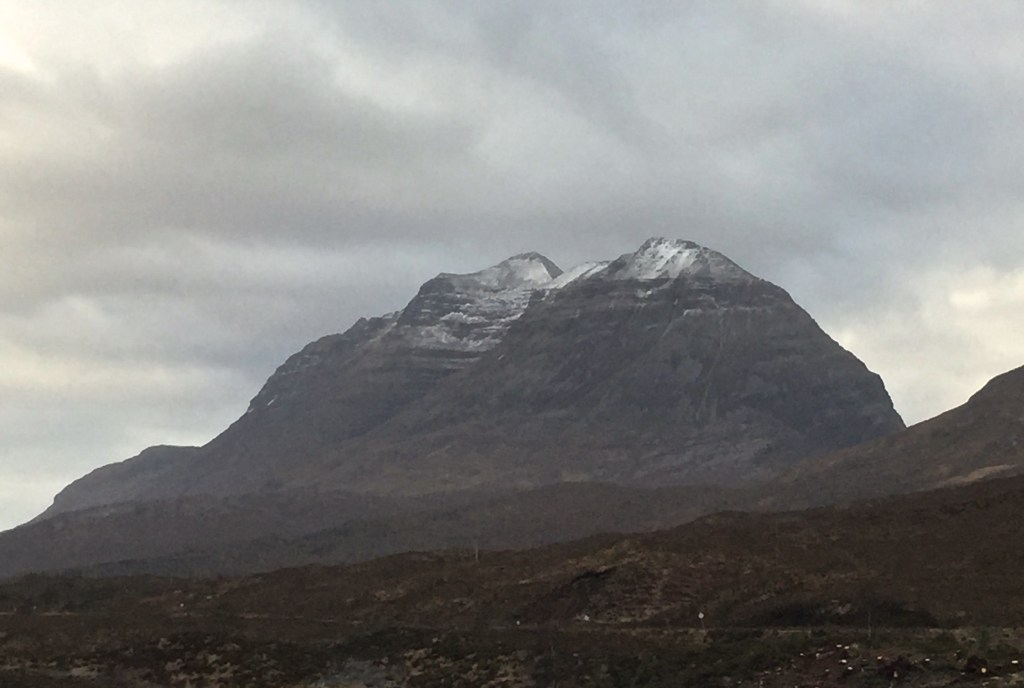